This rod of polished white oak is finely carved, with a head of an owl. It weighs 2-lbs. 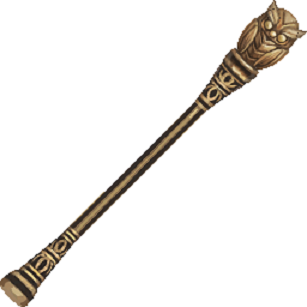 While wielding the Old Owl Rod, you gain a (+1) bonus to spell attack rolls and to the saving throw DCs of your warlock spells.

Power of the Owl’s Pact : In addition, you can regain one warlock spell slot as an action while holding the rod. You can’t use this property again, however, until you finish a long rest.

The Rod is held by Silverfrond as his personal equipment.

An arcane focus is a special item designed to channel the power of arcane Spells. A Sorcerer, Warlock, or Wizard can wield such an item as a Spellcasting focus, using it in place of any material component which does not list a cost.

The Old Owl Rod was recovered from the ruins of Old Owl Well by Harmon Kost, though he had no use for the item and stored it for later purposes among his possessions. It was recovered by the adventurers in late-Azura, TR 1050, when they attacked his camp.