“We reap what we sow. Choose what you nourish carefully.” 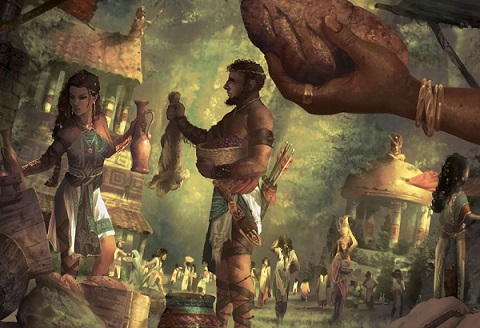 15th of Shorn, Early Morning : Fardelver : The day progresses rapidly, with the adventurers selling off many of their gathered treasures to the Lionshield Coster and taking their new-found wealth in preparation for the coming festival.

That evening, they gather in Daran Elderbreath’s orchard for the scheduled moot, finding many from the community and surrounding lands have gathered. Bran immediately starts by asking the community to bring forward any outstanding issues of concern to the community. A few fairly common complaints arise, including the information that the giant Ridorthu now lives in the neighborhood, and rumors of strange cultist activities in the region are being noticed. The locals are warned to attach bells to their livestock if they use the eastern hills for grazing, as Ridorthu seems to recognize that as a sign of ownership.

Someone brings up the costs of increasing patrols and other possible expenses of the baron’s rule… TAXES! The expected costs are agreed to be unknown at this time, and exact demands are suspended until the following month, and taxes are expected to be paid on the traditional day for such, the 15th of Uktar

It concludes with a strange ritual where the former bandits of the new baronial guard are asked to display their loyalty to the community, rather than themselves, wherein they cut off the brand of their former allegiance. Talrich leads the way as an example, and with Lamisson leading them, they all submit.

As the proceedings draw down, Dame Savra Bellmantle arrives in the splendour of her hippogriff. She formally invited the new baron to attend the master of her order, Thurl Masterson at their fortress, Feathergale Spire. While warned it is somewhat condescending towards him and his position, he accepts, and with the conclusion of the hallmoot, the group retires to the hippogriff paddock where they ask several questions of her regarding training and possible purchase of the fledglings in the coming weeks. She leaves the community displaying her control of her mount, and giving everyone hope moving forward.

16th : After a restful evening, the community gathers for the actual festival the next day. Filled to the bursting point, Fardelver has many visiting relatives, merchants and even a band of dwarves from nearby Thunder Rift in attendance. peddlars from far afield, weavers, tanners, cobblers and others come from surrounding communities, and a small market is set-up in the village commons, along with numerous smaller merchants who have travelled from Brightwater to acquire surpluses from the locals for the coming winter. Competitions for the fattest animals, an archery contest and a bout with staves is a highlight, and various performers (jugglers and minstrels) wander the market seeking coins. While the market itself ends with the fall of the sun, the merriment continues long into the evening.

Ebron manages to meet with Matron Isabeal Fernwood to foster the bugbear child Nodlehs and agrees to her service. Gareth spends much of the day with Nilsa wandering the market and seeing the sites. Moirin spends most of the day at the Sleeping Giant with her friend Falco. Bran looks for and finds the Chronicles of Glitterhoof, which contain a surprising amount of information regarding taxation and the duties required under a feudal government, as well as the rights and responsibilities of everyone in the situation.

In the evening, Gareth encounters a suspicious individual in the markets while looking for information regarding Glasstaff, and follows him to the “Sleeping Giant”.The obvious bandit is quickly identified as the individual the adventurers encountered back at Wyvern Tor, and he and his companions leave the inn with their horses, riding east out of the town some time after dark. The group gathers and makes plans to follow their trail on the morrow.

17th : Gathering at the Stonehill Inn, the adventurers head east out of town, and follow a small trail that leads east past the Echo Hills toa rocky pass that edges into a rough valley footing the Sword Mountains. This proves to be watched over by a bare spire of stone that has clear view of the approaches, and none in the group had never seen nor heard made mention of before. Ten scouts the barren area around the tower in cat form, eventually approaching the stone bridge that leads across to the entrance, where the guards watching the entrance try to boot her off the bridge. She escapes and reports back to the adventurers of her findings. They begin looking for options and discuss how to assault a literal fortress only a few hours out of town…

Episode 12 - Into the Woods