Skills : Perception (+3).
Senses : Darkvision. Passive Perception 13
Languages : Always obeys Silverfrond’s commands, which can be given telepathically while it is within 100’ of him.
Challenge : 0 (10 XP)

Borrowing : You can see through the raven’s eyes and hear what it hears while it is within 100’ of you.

Invulnerable : While perched on your shoulder, the raven can’t be targeted by any attack or other harmful effect; only you can cast spells on it; it can’t take damage; and it is incapacitated.

Mimicry : The raven can imitate or mimic simple sounds it has heard, such as a person whispering, a baby crying, or an animal chittering. A creature that hears the sounds can tell they are imitations with a successful DC 10 Wisdom (Insight) check.

Perceptive : Darkvision. While the raven is perched on Silverfrond’s shoulder, you gain darkvision with a range of 30’ and a bonus to your Wisdom (Perception) checks. The bonus equals your Charisma modifier.

The Pokemon Effect : The raven vanishes when it dies, if you die, or if the two of you are separated by more than five (5) miles. At the end of a short or long rest, you can call the raven back to you, no matter where it is or whether it has died, and it reappears within 5’ feet of you.

In combat, you roll initiative for the raven and control how it acts. If it is slain by a creature, you gain advantage on all attack rolls against the killer for the next 24 hours.

Sentinel : The raven doesn’t require sleep. While it is within 100’ of you, it can awaken you from sleep as a bonus action.

“Ravens black,
On wings of night,
Nine worlds circled,
In their flight…”

Ravens are sly tricksters, fond of quickly attacking an enemy and then darting away. Ravens are not considered the most beautiful of birds, but they can be taught to be useful. Although, they do not need to be taught how to tease; that is bred in their blood. 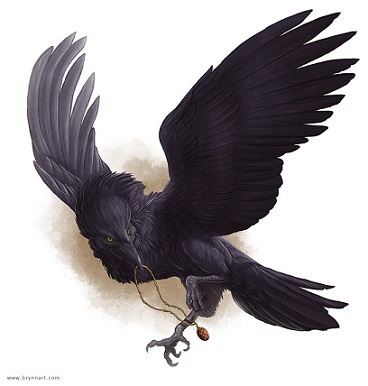