Eldest child of Mirna Dread. A curious young woman of barely sixteen years, Nilsa Dread is a compassionate, lively girl who often watches the knights who visit her small community, and has always envisioned herself being swept away to live in a castle as their lover. This generally good nature leads her to quickly fall in love with those brave knights, and her kind, lovely attitude is destined to bring her a life of pain. She is also quite brave, and loves both her family and those who are supportive towards it.

She presently works at the Stonehill Inn as a sculler, and does the laundry for the guests, mostly as a way to help the small family recover from their losses of home and father/husband.

“You are a good man, Gareth. You are as the Goddess intended. I loved you then, as I love you now.”

Born in TR 1043 the daughter of the local alchemist, who was slain by the Redbrand’s mysterious leader, Glasstaff, Nilsa has always been an idealist and a dreamer. Her early years were highlighted by learning some basic aspects of the healing arts at her mother’s hands, but she always found herself following the activities of local knights whenever they visited her hometown.

Following her father’s death at the hands of the Redbrands, she, her brother and mother were kidnapped and taken away for later sale to the Iron Ring, more as an example than anything. The group were rescued by the adventurers in 9th of Azura, TR 1050, under the cellars of Treegaard Manor.

Returning to a bleak life of hard-work and with little promise of reprieve, the adventurers returned her father’s various alchemical gear and books to her family. In gratitude, the adventurers were treated to a large, if simple meal, during which she noticed how quiet and unassuming Silverfrond had been, and trying to draw him out of his shell, found she liked him more and more. When she spied him leaving a handful of gold coins behind when he left, she ran back out to hug and kiss him, thanking him for he and his companion’s efforts to help them. By this point, it had become obvious no one had noticed the concern she was showing towards him, more and more.

For many days, she quietly watched and flirted with Silverfrond, until the night of the 30th of Azura, when she lured him into the stables and after seducing him, attacked and nearly slew him. Only the timely arrival of Ebron, who seemed to notice the absence of Gareth, managed to thwart the assassination effort, with Gareth getting in the killing blow as it shape-changed into an angel (?) and tried to fly away. Nilsa was later found gagged and bound in the back of the stables, her clothing taken. In gratitude, she spent the night with Gareth in the stables and consummated their love.

Nilsa remains a conundrum for Gareth to sort through, as their relationship gets more serious and more confusing. 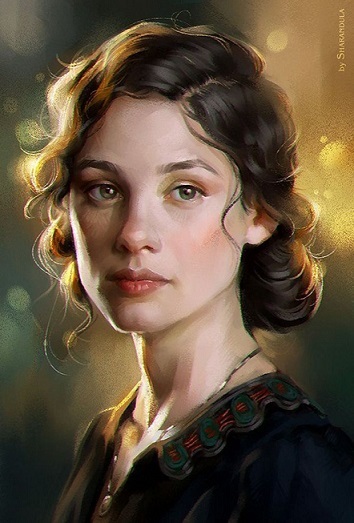